I recovered slowly from food poisoning and Jessica and I left LIsbon feeling like we had grabbed the city with one hand rather than two.  It is a city of steep streets with trams that climb them. We stayed between the Bairro Alto and Alfama areas of the main city down by the river where we watched the sun go down. All this was lovely, not so lovely with a stomach in recovery.
We headed for Porto on a bus that drove up the west side of portugal as the light shone onto us from the direction of the coast.
The bus arrived and we put on our heavy packs and worked out the location of the airbnb apartment we were to stay at. It turned out to be a good place and not far from everything you would want to see on a 2 night stay in Porto.
We walked into town and ordered a late dinner on a large pedestrian street called Av Aliados. There was a TV playing an athletics event held in Oslo and with the sound muted we tried to work out where all the participants came from by reading the Initials of their shirts (KSA? ROU? GRN?).

Jess and I awoke around 9 am hoping to make the most of what would be our only proper day in Porto. My stomach made me think twice about what I could put into it and my hayfever made a triumphant return. I become a wimpy, wheezing, whinger who could not of been good company (sorry Jess). We headed toward the river Douro where the buildings are piled on top of one another on either side. One side of the Douro houses famous brands of port and when we bought a ticket to tour the river by boat we received a ticket for a free-tasting. I was feeling better.
The boat cruise was beautiful and so was the weather. We passed under the many bridges that appear to be the result of an architectural competition. The winner is easily the “Luís I” – a twin level bridge with a large arch, resembling the steel of the Eiffel tower and designed by a partner of the man himself – The Luis I Bridge is impressive to look at from whichever angle. After the cruise we sat out on the river side with a view of the bridge and ordered drinks. Jessica went to the bathroom and I waited, watching the other tourists and judging their lives in my head. I heard a woman behind me speaking loudly in Portuguese followed by a collective scream from her and many people around. Everyone was looking toward the bridge, leaving their tables to get a better view. I got up myself and soon heard that a man had just jumped to his death, from the Luis I, 20 minutes after we had floated beneath it. Jessica and I sat down. Within 5 minutes you would not have known anything happened. People were drinking, laughing, a guy was playing a saxophone, the sun was shining and in the background a police search-boat was combing the river for a dead body. That is the thing about dying – not only do you go, but everything else goes on without you.

We went to the port tasting and looked again at the river from the rooftop bar. We made friends with the bartender and found out the day’s suicide was something of a banality. She told us some really sad stories, people have been jumping from the bridge all year and mainly because of money, or rather lack of money. 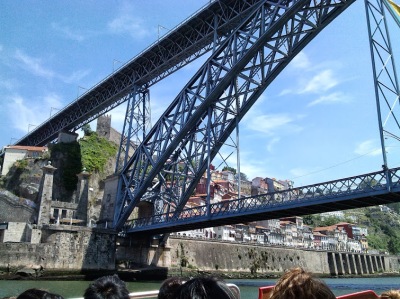 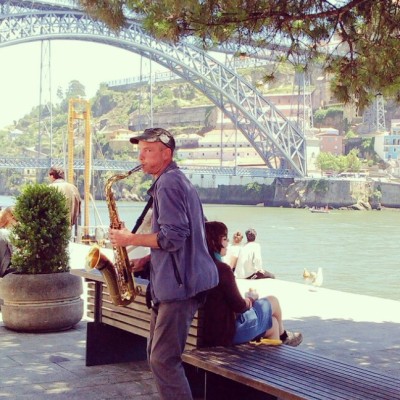 Early the following morning Jessica had a flight to Frankfurt and I had a flight to London, both leaving at the same time. We went through security together before I was held up as my bag was being scanned. “Please remove the knife from your bag” I knew I didn’t have one but I thought maybe I had something made of metal, so I searched. Before I finished looking through the bag the woman at customs grabbed it to scan again. Other customs officers started gathering and I felt that everyone else was looking. The police were called and I was asked to stay at the end where you collect your belongings. Through the small crowd of officials I could see they were scrutinising a gun shaped item on the screen. It was at this point I realised I had left my penis-lighter in my bag, a penis-lighter that had a gun handle with a trigger to start the flame which came out the end of the knob. The crowd of officials were gathered around looking at a penis on the x ray.  From where I stood I could see the knob outline and everything. One policemen opened my bag and pulled out the lighter, (holding it by the shaft and not the gun handle) walked up to me and said “I know this is a dick, but it looks like a gun and for that reason I am confiscating it”. Brilliant.
Jess and I said goodbye for what seems like the hundredth time. It may only be a fortnight but we are both tiring of the long-distance. Our entire relationship has been long-distance and that is why New Zealand will be good when we are both there, very soon too.

4 comments on “Portugal, Death and Penis”